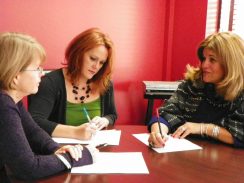 CCCS Awarded PRF48 Contract
On April 1, 2011 CCCS was one of the vendors awarded the state contract PRF48 for Massachusetts.  This means that CCCS is a recognized vendor to the state of Massachusetts for:

CCCS stands behind the quality of all of our products and we invite you to see how CCCS has been a pioneer in the interpreting industry.

CCCS, Inc has been a pioneer in many different aspects. In 1996, CCCS became one of the first institutes in the U.S. to teach healthcare interpreting. Our healthcare interpreting program was the result of many years of interpreting experience by CCCS’ founder and President Zarita Araujo-Lane, LICSW. Drawing on her experience in combination with her team that includes providers, interpreters and educators, she developed a unique program that included many firsts for the industry. Here are a few examples of how CCCS has proved to be an industry leader.

Accredited Interpreting School
CCCI, a division of CCCS, became the first accredited postsecondary school for interpreters in NH and possibly nationwide. In addition, CCCI is in the process of applying for the same status in Massachusetts.

Language Coaches
CCCS was one of the first companies and training institutions to introduce the concept of Language Coaches to the industry. Language Coaches are active experienced interpreters that work with students in small group settings where all of the students speak the same target language. Language Coaches are a key component of the course as they give personal attention to each member of the group and provide guidance and feedback to help the student improve their skills. CCCS has developed a training manual for their language coaches and by the end of 2011, both training and manuals will become available to the general population.